Argentina’s Vaca Muerta shale play, having registered strong growth in oil and gas production and well activity levels in recent months, has emerged as the world’s fastest growing major shale basin, a Rystad Energy report shows. A record number of wells were completed and put on production (POP), propelling the play’s oil and gas output to new highs in July and August, and charting a course for even more growth by year-end. This surge from Vaca Muerta is poised to lift Argentina’s country-wide oil production to the highest level in years, with the play’s competitiveness also rising against US basins.

Although complete data for September is not yet available, there is no doubt that the third quarter of 2021 will set a new record for the number of horizontal wells put on production in Vaca Muerta, with Rystad Energy estimating that the POP count will reach around 73 oil and gas wells. The previous record was in the fourth quarter of 2018, when the count reached 59 wells.

The Vaca Muerta oil zone will probably see more than 50 wells put on production between July and September, while gas well POP activity will likely remain in the range of 20 to 25 wells for the quarter. While that means another record for oil wells alone, the gas well count has been higher in the past.

This surge of activity caused oil production from the basin to rise beyond 160,000 barrels per day (bpd) for the first time ever in July, reaching an average of 162,000 bpd for the month, followed by an equally strong August that saw production at 161,000 bpd. For context, Vaca Muerta’s oil output had never exceeded 120,000 bpd until December 2020. Rystad Energy expects production to increase by as much as another 25% over the next three months, to close the year at nearly 200,000 bpd.

Argentina’s country-wide oil output peaked at nearly 850,000 bpd before the close of the 20th century and has since been in steady decline. With August production averaging nearly 525,000 bpd, representing a full recovery to the pre-Covid-19 levels seen in the first quarter of 2020, the expected additions from Vaca Muerta could help elevate the country’s monthly output to 560,000 bpd by December – a benchmark not seen since October 2012. 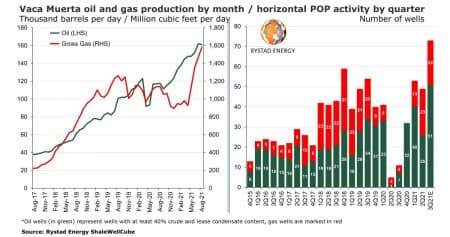 The current level of elevated POP activity is likely to be maintained in the final three months of this year and the first quarter of 2022, as sequential increases in the third quarter finally bring POP activity in line with the pace of drilling. The drilling rate in Vaca Muerta’s operating area, including some non-Vaca Muerta activity in the region, was generally higher than the completion and POP rate, which resulted in a build-up in the inventory of drilled but uncompleted wells (DUCs) – approximated by the number of spudded but not yet producing wells for the purposes of this note.

The DUC count increased from 240 to 330 wells through the first half of the year before stabilizing in July and August, pointing to POP activity finally catching up with the pace of drilling. As of August, the DUC inventory was still equivalent to about 10 months of the current run rate of POP activity.

“There is no doubt that an average development in the Vaca Muerta oil zone delivers significantly higher production rates on a barrel of oil equivalent (boe) basis than an average US onshore tight oil well – with the Permian Delaware Basin being the only one that comes close to Vaca Muerta in this aspect,” says Artem Abramov, head of shale research at Rystad Energy.

This superior productivity is partially offset by higher drilling and completion costs in Vaca Muerta compared to the Permian, Eagle Ford or Bakken plays in the US. Even so, significant progress has been made in recent years and Vaca Muerta has advanced rapidly on the global unconventional cost curve. Primarily due to the less competitive cost structure, a typical Vaca Muerta oil window well was worse than the lower quartile of Permian wells during the period from 2015 through 2017.

While the Vaca Muerta story really began several years ago from one key area – the Loma Campana block – the basin is witnessing the start of full-scale development across the whole operating area in the core part of the oil zone. Argentine operator YPF has been delivering record-high volumes outside of its Loma Campana area. Shell, Pan American, TecPetrol and PlusPetrol are examples of key producers achieving record-high numbers in July-August.

With respect to gas production, TecPetrol and YPF were the key drivers of the outstanding growth seen over the past five months, though gains by Pan American and PlusPetrol also contributed to the record-high volumes achieved in August.

Many member organizations of Vietnam Electricity (EVN) have been promoting the application...
Learn more →

Renewable energy capacity to nearly double in ASEAN by 2025: HSBC

Technological advancement and lower costs of renewables will drive this expected...
Learn more →

In recent years, the installation of rooftop solar panels has appeared and...
Learn more →